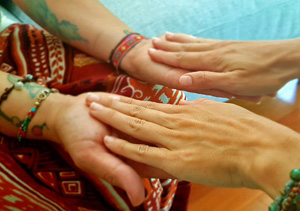 This technique is designed to change the electrochemical status of the brain, by removing the stress response that gets generated when certain anxiety-related areas are accessed. Namely, it can de-traumatise specific memories, removing their negative effects on the body and psyche, hence the person retains the capacity to access those areas of the brain without experiencing the emotional distress they typically generate.

Havening Techniques belong to a larger group of methods called psychosensory therapies, which use sensory input to alter thought, mood and behaviour. The system is comprised of protocols and methods that use touch as a therapeutic tool we call Havening Touch®. This touch generates a delta wave in the brain. Havening can be used within a psycho-therapeutic setting, by professional mental health-care clinicians who have been fully trained and certified in the Havening Techniques, or by allied health care professionals as a protocol for coaching, wellness and stress reduction.

When to seek Havening?

People typically seek Havening when they are suffering from anxiety-based conditions (such as the aforementioned), however one of the key focus areas of this technique is the treatment of trauma. When an individual is directly or indirectly exposed to a traumatic event or events, a strong emotional response such as fear, terror or anxiety is triggered. If the individual believes they cannot control or escape this event, and they have what is referred to in Havening as a vulnerable landscape e.g. the individual is emotionally vulnerable, is sensitive to the environment, or has had previous exposure to trauma, then permanent encoding of the trauma and associated feelings and emotions, is more likely. Havening can be used to delink the emotional response to the memory of the trauma.

What happens during a Havening session?

During a Havening session, the person sits on a chair and is guided through specific mental exercises, while the practitioner performs (or leads) Havening touch (a specific soothing touch on the palms, upper arms and forehead, designed to induce delta brain waves and consequently change the chemical structure of the neurons affected by the trauma).

A typical Havening session lasts between 30min and 1h, and the effects are expected to be permanent.