10 things I hate about you: Understanding relationship tangles 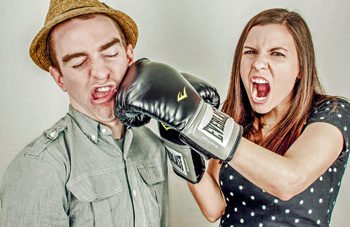 Ten things I hate about you is the title of a 1999 film, and also of a subsequent 2009 TV series, both loosely based on William Shakespeare’s play The Taming of the Shrew. I’m starting here because it conveys both the intensity of feeling many of us can experience in relationships, coupled with the fact that often we seek out or continue to stay in these relationships.

"Stop treating me like a child", "Don't nag me", "How come you never listen?", "You're behaving like a child" and other expressions like them will probably be painfully familiar. Here is one way of thinking about this. A process known to therapists as projective identification may be at play. This may seem complicated, but it may also help to understand and to begin to sort out tangles in relationships. Incidentally, it’s also relevant to understanding other aspects of communication as well, but that’s for another time.

If you’re coming with me, allow me to elaborate. I’ll need to mention and outline the psychoanalytic concepts of transference, countertransference, projective identification and containment.

The phenomenon of transference is apparently universal, and can be seen as related to the process of projection. Transference is the bringing (or transfer, or projection) of a past experience into a present one, such that the present is experienced as if it were the past. The past experience is in general one that is not available to consciousness in itself, but which is expressed through distorted perception of the current situation, or an intensified emotional reaction to it. It entails some distortion of the present experience, as this is unconsciously invested with meaning from the past. Objects (of relationship and perception, that is, people and things) can become polysemic, containing a number of simultaneous meanings at the same time.

For example, a partner can seem at times also to be like either of one’s parents, or one’s child, and often in quick succession or even simultaneously, as if one were relating to that familiar other or others and not one’s partner. Transference is part of what gives emotional depth and significance to any relationship or experience. Transference enters into all significant relationships (including those with places, objects and ideas as well as people), that is, all relationships that are invested with considerable emotional meaning.

Freud’s attitude to countertransference was to take a narrow view, and to regard it as a hindrance, resulting from insufficient analysis of the analyst. In the first half of the twentieth century, the appropriate response to the experience of countertransference was seen as a return by the analyst to their own analysis. Even though Melanie Klein’s 1946 conceptual work laid the foundations for the subsequent and continuing burgeoning of interest in intersubjectivity, she was reticent about the extension of possible uses of her concept of projective identification, which was to become a key building block in the development of this interest. Klein thought that extending her ideas in this way would open the door to claims by analysts that their own deficiencies were caused by their patients.

Projective identification is the interpersonal phenomenon where an individual unconsciously projects elements of their experience (for example, sadness) onto an available other. An additional requirement is that there is a valency within the other to receiving and responding to the projection, in other words that this other is a potential introjector of this experience. It is crucial that, at some level, the other is involved. The projector can then relate to and identify with the projected experience within the introjector.

Projective identification is different to more straightforward projection, which is open to reality testing. For example, in projection, someone may remind me a key figure in my past, such as a parent. However, if this person does not have a valency to introject my projections, and if my need to project and to projectively identify is not overwhelming, then we can establish relatively easily through reality testing (a collaborative check on individual and shared experiences) that this is not the relationship that I might anticipate from my previous experience.

An example of projective identification would be ‘Helping Profession Syndrome’. Some helping professionals with traumatic pasts, perhaps involving childhood abuse and neglect or other traumata, are unable to process and deal with these experiences directly. Instead, they are drawn compulsively to respond to and to deal with these experiences in others, for example by choosing, at least partly unconsciously, to work with clients who have experienced similar traumata. Incidentally, avoidance of phenomena of this type is one reason for the requirement for intending psychotherapists and psychoanalysts to undergo therapy themselves before and during qualifying to train or to help others.

Although this example may help understanding of the process of projective identification, it is relatively negative, focusing on its function as a psychological defence mechanism. Projective identification like transference is an apparently universal phenomenon, and almost certainly reflects something of the nature of the human mind. It is crucially important for a number of reasons other than as a mechanism of defence, not least for its role in the interpersonal communication of experience, as in countertransference. Here, it leads to evocation of thought and feeling in the therapist, which can be understood and shared with the patient. This can be through the therapist’s way of being with the patient, as well as through the construction and offering of interpretations. Projective identification can also be seen in creative activities, such as in the making of various forms of art, and in writing, particularly poetry.

There are other key psychoanalytic concepts related to transference and countertransference. One is that of containment, described by the psychoanalyst Wilfred Bion. Bion’s interest in the earliest stages of the mind led him to focus on the link between something innate (an infant) and something foreign (an experience perceived in external reality).

For example, a newborn baby already seems to know what to do when a nipple touches its cheek. Its head turns and it begins to suckle. The reflex seems to be innate, but the nipple has to be there in the external world to realise the reflex. In Bion’s view, when an innate pre-conception meets with a realisation (in perception), they link to create a mental object, and with it, a mind to hold the mental object.

Bion went on to note that in this type of example of linking, one thing (the nipple) goes inside the other (the infant’s mouth). This notion of linking is of an intimate process, rather like a hand in a glove, and captures the important notion of the inside quality of links. Bion developed this into the notion of containment, and the concepts of container and contained.

Most simply, containment is a function where primitive emotional material (often consisting of anxieties) can be held on to until it can be transformed by thinking. Importantly, he stressed that containing is not a passive function, but an active inter-relationship, in the case of this example, between mother and infant. He described a range of possibilities along a continuum between rigid, dutiful containment, through flexible containment, to fragile containment prone to disintegration. The extremes of this continuum will represent unsatisfactory care, where either the infant experiences presence but with no understanding and no attuned response, or a sense of his or her experience being destructive and intolerable as the mother or father ‘goes to pieces’ or panics.

In between these extremes, the mother or father responds by acknowledging the infant’s anxiety and doing what she or he can to relieve the infant’s distress. Then, as Hannah Segal has put it, the infant’s perception is that he has projected something intolerable into his object, but the object was capable of containing it and dealing with it. He can then reintroject not only his original anxiety but an anxiety modified by having been contained. He also introjects an object (or person) capable of containing and dealing with anxiety.

In everyday life & in therapy

I am taking a particular view of human relationship and communication built out of the concepts that I have outlined. These concepts can be used together make sense of everyday experience, especially when aspects of that experience may otherwise be inexplicable. For example, in therapy, difficult emotional experiences of which the patient may not be fully consciously aware can be evoked in the therapist. The therapist can then make an attempt at elaborating and understanding them through examination of their countertransference.

At the same time, the therapist’s capacity to contain the emotional experience and to undertake at least some transformation of it can be powerful and therapeutic for the patient. This is a clinical example: other examples can be found in various forms of social interaction (such as in work and educational settings) and in relations between individuals and groups on a societal level.

This is a lot of theory, but the understanding it can generate has considerable practical significance. The take-home message is that It takes two to tango. For example whatever you hate about your partner (boss, sibling, neighbour etc) is quite possibly something you secretly hate about yourself but also a role that your partner (boss, sibling, neighbour etc) unconsciously buys into. These dynamics are not always easy to untangle but a grasp of the concepts of transference, countertransference, projective identification and containment gives access to some of the tools that the psychoanalytic psychotherapist uses to understand and to help to change such relationship tangles.

How I can help

My practice involves a range of work, with individuals and couples, and from brief contacts through a spectrum to longer-term exploratory psychotherapies. The concepts I have outlined are an important part of my thinking about the psychodynamics of both individuals and relationships. These relational psychodynamics can be those between members of couples and of other forms of group, such as work groups and teams, as well as those between me and the individuals, couples and groups with whom I work. If clients can engage with me (and where appropriate, with each other) in exploring these we can make sense together of how the past is impacting the present and of how things can be different in the present and future.